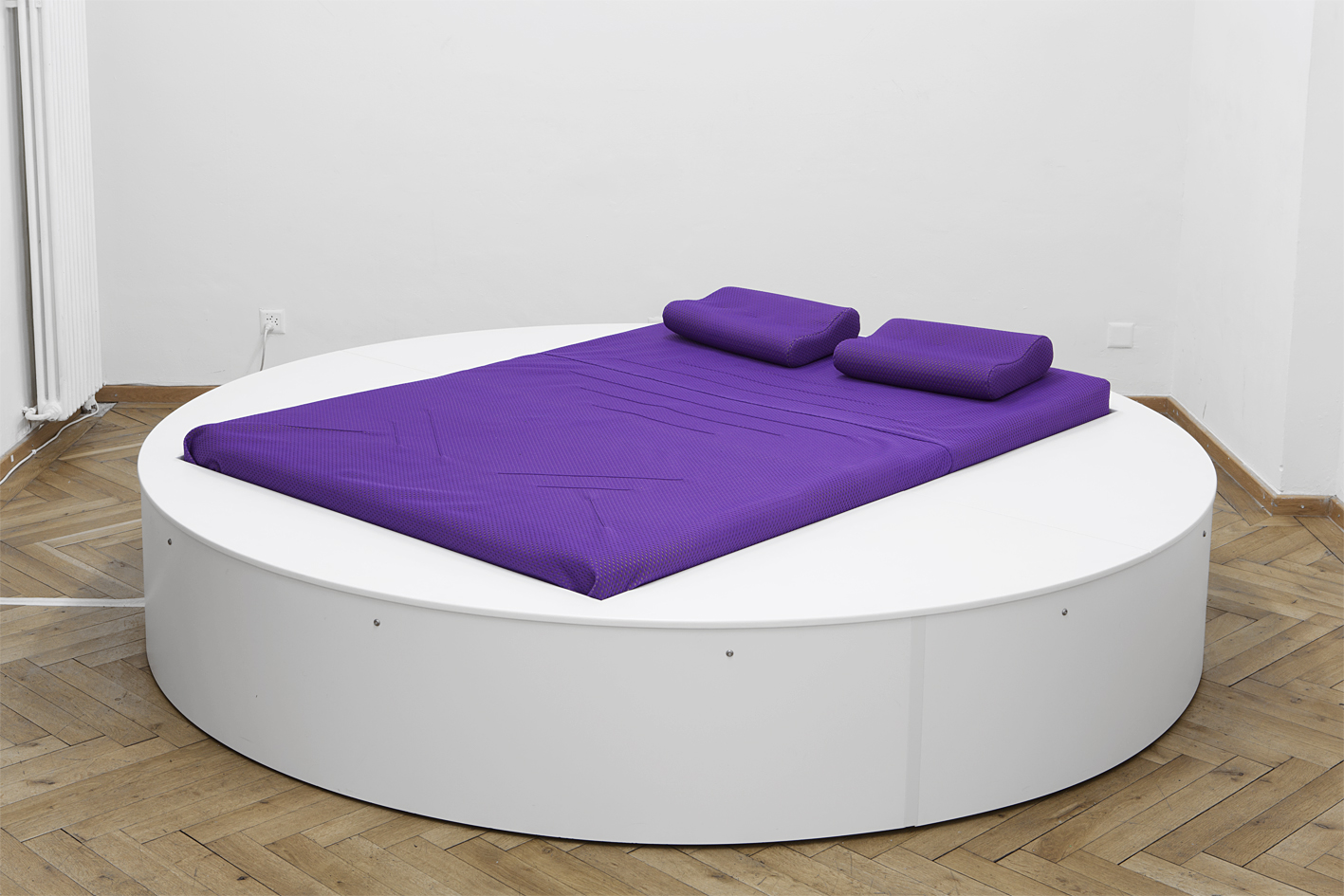 Between spatial-visual and temporal-acoustic regularity, Olsen’s installation “geostationary space travel” creates an irritating and at the same time elegantly chilling designed experience. The central object of the work, which determines the space, is a circular bed. It functions as a pointer that translates different cycles and makes them tangible, namely the individual speeds of the celestial bodies above our heads. Which object in the sky, a satellite, the moon or Venus, determines the cycle, can be chosen in this installation. Depending on the choice, the mechanical speed of the celestial body can be felt differently in the exhibition space. (Nils Röller)

Mission statement
Subseqent to the first images from the dark side of the moon (Lunik 3, 1959), the immediate exploration of the cosmos continues. So far the reachability of celestial bodies had been a problem of cosmonautics. The question if dreams not only influence our thoughts and feelings is still in need of an explanation. By mutating human organs of perception and through the prosaic arithmetic pursuit of all apparent laws of nature and difficulties of imagination, the present work would like to contribute to the finding that the universe never sleeps: It will be possible to spend a night in the orbit of various celestial bodies, e.g., in the orbit of Mercury, the fastest planet of our solar system, or in the orbit of the toolbag that Heidemarie Stefanyshyn-Piper lost November 18, 2008 during maintenance work at the International Space Station. This voyage is made possible by a rotating bed that serves as an apparatus to increase the capacity of the natural sensory organs of homo sapiens. Beside the bed, there is a monitor, on which a user-defined celestial body (planet, satellite, space junk etc.) from inside or outside of our solar system can be selected. According to your selection, the bed navigates towards the current position of the selected celestial body and keeps following its orbit in real-time. The lying/sleeping person will follow the orbit of the celestial body until a new celestial body is selected from the menu. By booking in advance people could spend a full night within the period of the exhibition. The day after the passengers got picked up for a space breakfast and had to file a report of their experiences.

> Why was the celestial body selected?
Ursa Major: because we didn’t want to sleep with the head towards the window and furthermore because Ursa Major is a celestial body that is moving quite a bit.
Scorpio: zodiacal sign

> How did you sense the orbit you were in?
First of all the circular bed in the empty room is quite nice.
It’s somehow strange to be moved during sleeping. You’re exposed to this movement in almost the same manner as we terrestrials are exposed to the earths’ movement – perhaps more connected than exposed. Even though I’ve been moving concurrently while sleeping.
In retrospect I became aware of the existence of the stars moving constantly around us. Usually I don’t spend time thinking about the existence of the universe.

> What could you do, what not?
Both of us could sleep … though during the night we once had trouble operating the bed.

> Why was the celestial body selected?
It moves fast, but not too fast.

> How did you sense the orbit you were in?
Sublime. I dreamt (see a href=”http://hasa-labs.org/img/sleepcycle.PNG”>sleep-wake cycle). It was kind of cool: after waking up and first opening my eyes, next I was trying to relocate myself in space.

> What could you do, what not?
Because of the low temperatures I couldn’t really enjoy it. Sleep in peace because of the noisy passerby’s (Friday night)

> Why was the celestial body selected?
Due to the predictions of a this years kiosk horoscope

> How did you sense the orbit you were in?
Very pleasant voyage. A feeling of free and weightless spinning!

> What could I do, what not?
The space travel passed almost too fast! I could only fly over all of the provided non-fiction literature.
A feeling of deceleration emerged with the exclusivity of the experience, though I wouldn’t mind if it would last longer in real-time!

> Why was the celestial body selected?
As a result of the prediction of a very cold night.

> How did you sense the orbit you were in?
Perfect dreams. About flying.

> What could I do, what not?
Couldn’t sleep without interruptions. I had to check my position at 2 am